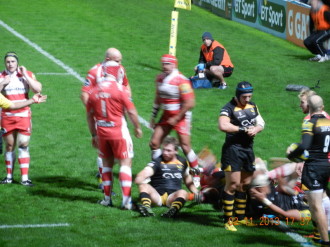 Away Colours: Blue and White

The club was formed in 1873 after a meeting at the Spread Eagle Hotel. An announcement appeared in the Gloucester Journal: “A football club has been formed in the city- the season’s operations begin at the Spa on the first Tuesday in next month.” A team was then formed to play the College school-a game played ironically enough, on the site of the current Kingsholm.

The club had to leave the Spa after an argument with the cricket club that they were ground-sharing with. During the winter the rugby club had used a salt mixture to remove frost from the pitch, resulting in the death of the grass on the wicket. Gloucester RFC then acquired lands form the Castle Grim Estate for £4000 in 1891, and have resided in this place, known as Kingsholm, ever since.

Upon moving from the Spa in 1891, Gloucester RFC opened the “Sixpenny” stand, which would later become known as the Shed. Kingsholm’s capacity was further increased in 1926 when a grandstand was added at a cost of £2,500, containing 1,750 seats. However, six years later it was destroyed by fire. Although the grandstand was replaced, terracing in the Sixpenny, and at the Tummp end, was preferred.

Indeed, it was more affordable in the early 20th century, as Gloucester traditionally drew its support-and its playing strength-from local working-class communities. The Shed, so-called because it looks like a cow-shed, became known as such in the 1950’s. Gloucester Rugby’s fanzine, “Shed Head” refers to it as “the cauldron of fear”. The Shed is a standing-only terracing that runs continuously down one touchline, opposite the point where visiting teams emerge from the dressing rooms.

In October 2003, Gloucester Rugby launched “Project Kingsholm”. The “Kingsholm Supporters Mutual” (KSM) was set up by the club to help fundraise towards the redevelopment of Gloucester’s entire ground at a cost of £6million. But despite the KSM meeting the fundraising targets Gloucester Rugby abandoned the plan.

Then in 2006, the club announced it would be making an extension to Kingsholm, bringing the capacity up to 16,500. The old main grandstand (which was both terracing and seating) was later replaced by a new all seater structure, while terracing on the Worcester Street end of the ground was developed into an all-seater stand, known as the “Buildbase” Stand at the time.

In January 2007, the club announced plans to redevelop The Shed to enable the entire stadium to become seated. This met with a lot of opposition, and a poster campaign under the name of “Save Our Shed”, or “SOS”,was initiated by the KSM, and sponsored by the Gloucester Citizen newspaper. In September 2008, Chairman Tom Wilkinshaw confirmed there were plans for the Shed to be redeveloped, but it would remain as a terrace, with an increased capacity of 6000.

However, the need and desire for developing the Shed has decreased, and the plans to do so appear to have been abandoned.

Kingshom is appropriately sited at the centre of a rugby-mad city. Its first match was played on October 10, 1891,when Gloucester took on Burton.
In 1932 the main grandstand was built. It stood for 75 years before being
demolished and replaced by a new 7,500 – seater structure with modern
hospitality suites, changing rooms and media facilities. The East Stand was constructed a few years earlier.

The ground has become famous for its legendary standing area, The Shed, which houses the club’s most passionate followers. Opposition players habitually receive taunts and cat-calls from the denizens of the enclosed terrace which stretches along the northern touchline. Its in turns both an intimidating and inspiring environment, depending on whether you are wearing cherry and white or not……

Kingsholm has hosted two rugby union Test matches. The first, in January 1900, saw Wales beat England 13-3 in the-then Four Nations Championship with legendary full-back Billy Bancroft leading the Dragons to victory against an England side with 11 debutants.
Kingsholm was used in the 1991 Rugby World Cup for New Zealand’s
clash with the USA. Full-back Terry Wright scored a hat-trick of tries in a conclusive 46-6 win for the All Blacks. Kingsholm was one of only two club grounds nominated on the list of venues for the 2015 Rugby World Cup.

Outside of Rugby Union, Gloucester’s home was used for the 2000 Rugby League World Cup for a game between New Zealand and Lebanon.
Future Gloucester stars Henry Paul and Lesley Vainikolo played in that game for the Kiwis.

Brian Moore tells a story about The Shed from his days as a Nottingham player. During one game, whenever he threw in from a lineout in front of the notorious terrace of Gloucester fans, a voice amid the masses would shout: “Moore, you’re a wanker.” More stewed over this abuse on the bus journey home and, indeed, for much of the year that separated him from his next trip to Kingsholm.

The next time Nottingham visited, the abuse resumed just as before.
This time Moore was ready. Turning to his accuser, he replied: “Yes, but at least I have to hold mine in both hands”. The response was allegedly so cutting and offensive that suffice to say Moore was left speechless again. His misery was complete.

Their cherished stand used to be known as the “popular Enclosure” but then, so the story goes, a London reporter referred to Gloucester’s facilities as being “ no better than a shed” and the name stuck. Chelsea football club had a “Shed End” which housed their hooligan element and Peter Ford, a Gloucester legend, and former club president, is said to have gone bananas at the connotation.

As a former captain and coach of Gloucester, Keith Richardson is one of the few outsiders to attain legendary status at the club. A Geordie, he arrived in 1968 to take a local teaching job and felt instantly at home. “Gloucester was different from anyone else, it’s a working man’s club,” he explains. “We’re the only grass-roots first class club; there’s not another like us in England.
In my time most of the team were from the city, and everyone knew everyone. It was very egalitarian. If you were good at rugby, you were good enough full stop. London clubs used to hold spaces open for Oxbridge players at Christmas. Gloucester wouldn’t hold a space open for the Queen.

Mike Teague has 291 Gloucester games to go with his England
and Lions caps and today he runs his pub opposite the queue to The Shed. On match days it’s heaving and inside you’ll find the inscription: The most rugby-crazed pub in the country’s most rugby-crazed town.

Too much of a Good Thing? (Tue, 26 Nov 2019)
Is it just us, or is there just a little too much rugby at the moment? You couldn’t fault the World Cup or the action, but to get into the European Cup two weeks later feels just a little bit more of a burden than it should do. And then, having forgotten about it because … END_OF_DOCUMENT_TOKEN_TO_BE_REPLACED
>> Read more

Saracens in the Dock (Tue, 12 Nov 2019)
Just imagine for a moment what the last 10 days have been like if you are one of Saracen’s England players…You lose a World Cup Final, have to endure a long, tedious flight back to England, where, instead of an open-topped bus parade through London, you are met with the news that your club has … END_OF_DOCUMENT_TOKEN_TO_BE_REPLACED
>> Read more

The Championship Starts (Tue, 15 Oct 2019)
Greene King Championship London Scottish (13) v Newcastle Falcons (17) The Athletic Ground Saturday October 12,2019 The 2019/20 Greene King Championship season kicked off this weekend, though you would have been forgiven for not noticing. Probably something to do with a World Cup taking place on the other side of the world. Nevertheless, over a … END_OF_DOCUMENT_TOKEN_TO_BE_REPLACED
>> Read more

Premiership Rugby Cup (Tue, 24 Sep 2019)
There is a small matter of a World Cup taking place at the moment. It kicked off last Friday (September 20) and will dominate coverage of the sport for the next six weeks. As a consequence, the English domestic season, which normally starts at the beginning of September, was put back. The Gallagher Premiership has … END_OF_DOCUMENT_TOKEN_TO_BE_REPLACED
>> Read more

Rugby’s heavyweights ensure World Cup will garner Japan only fleeting prestige (Tue, 03 Sep 2019)
Rugby union is turning Japanese, but not for long. Once the World Cup is presented in Yokohama on 2 November and the bunting is swept up the hosts, like the other tier-two and -three nations making up the numbers, will slip back into relative obscurity for the next four years. Some will emerge briefly for … END_OF_DOCUMENT_TOKEN_TO_BE_REPLACED
>> Read more