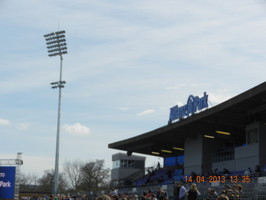 Away Colours:   White and Blue

During the 2012/13 season simply watching Saracens play at home was a ground-spotters delight.

On January 25 2013 the newly renovated, and re-named Allianz Park, had its "soft opening ", hosting its first Saracens match against the Cardiff Blues, with Saracens winning 19-11 in the LV=Cup before a crowd limited to 3,500. The full opening came on February 16, with saracens defeating Exeter Chiefs 31-11 in a Premiership match before a capacity crowd of 10,000.

Saracens were founded in 1876 by the Old Boys of the Philological School in Marylebone, London (later to become St. Marylebone Grammar School). Saracens amalgamated with neighbouring club Crusaders two years later. In 1892 Saracens moved from Crown Lane, Southgate, to Firs Farm, Winchmore Hill, then played on nine different grounds before the move to Bramley Road
for the 1939-40 season although the Second World War actually prevented them from playing there until 1945.

Saracens found it difficult to get games against first class sides as the facilities at Bramley Road were so poor. After their inaugural match against Blackheath they had to wait another nine years before Harlequins offered to include them on their fixture list.

Ironically, the 2010/11 English champions played at the most unprepossessing ground in the Premiership. Vicarage Road has been something of a millstone since their opening fixture at the ground- against Richmond on August 31 1997-was postponed because of the death of Princess Diana. “We hate this place”, a club official has admitted, a view allegedly echoed more forcefully by one tabloid journalist when the Wi-Fi didn’t work.

Nov 10 2010 : Saracens confirmed that they have entered into detailed discussions with the London Borough of Barnet about the possibility of
transforming Barnet Copthall Stadium into a multi-purpose sports venue.

The stadium, currently home to Shaftesbury Barnet Harriers amongst other sports clubs would become a premier athletics venue as well as a Premiership rugby ground.

The proposal is to comprehensively refurbish the existing main building to the west of the site and create a new permanent stand to the east which could be used by spectators of athletic meetings and rugby matches. Demountable stands would be in place during the winter to increase the capacity of the ground to 10,000 spectators for up to 16 rugby games per year to accord with the requirements of Premiership Rugby.

The Barnet Copthall venture is bold, but also well overdue. In Sarries’ early days at Vicarage Road the inspired marketing strategy of the late Peter Deakin made the groundshare with owners Watford FC look as if it would work, with crowds regularly over 10,000 but the rental price has always been excessive given the ramshackle state of the stadium. With crowds dwindling recently to fewer than 7,000 in a ground with a charm and atmosphere by-pass, the club has been on the look-out for a new home, and Barnet Copthall is an intriguing, but controversial choice.
The all-weather artificial turf that Saracens propose for the match pitch at the new ground has not met with the approval of all their Premiership rivals,but they expect to get approval from the Rugby Football Union, not least because the surface has already been passed as fit for purpose by the International Rugby Board. However, other clubs are concerned that Saracens’ greater familiarity with an unchanging all-weather surface will be an advantage, and they can expect any injuries on the ground to be heavily scrutinised.

The pitch is a big part of the proposed ground redeployment at Barnet Copthall, because, although the club will use it for 16 matches a year, it will be available as a community facility to Barnet Council for the rest of the time. Another innovation will see the 10,000 capacity all-covered stands start with a 20 foot overhang of the athletics track around the pitch perimeter, meaning that spectators remain close to the action.

Within easy walking distance of Barnet station and a short drive from Sarries’ traditional support bases in Southgate and Watford-the new ground is only eight miles from Vicarage Road-Saracens are hopeful that, at long last, they have a satisfactory solution to their long-standing ground problem.

Saracens announced that their opening match at their new Copthall Stadium home in Barnet will be against Exeter Chiefs on February 16, 2013

Too much of a Good Thing? (Tue, 26 Nov 2019)
Is it just us, or is there just a little too much rugby at the moment? You couldn’t fault the World Cup or the action, but to get into the European Cup two weeks later feels just a little bit more of a burden than it should do. And then, having forgotten about it because … END_OF_DOCUMENT_TOKEN_TO_BE_REPLACED
>> Read more

Saracens in the Dock (Tue, 12 Nov 2019)
Just imagine for a moment what the last 10 days have been like if you are one of Saracen’s England players…You lose a World Cup Final, have to endure a long, tedious flight back to England, where, instead of an open-topped bus parade through London, you are met with the news that your club has … END_OF_DOCUMENT_TOKEN_TO_BE_REPLACED
>> Read more

The Championship Starts (Tue, 15 Oct 2019)
Greene King Championship London Scottish (13) v Newcastle Falcons (17) The Athletic Ground Saturday October 12,2019 The 2019/20 Greene King Championship season kicked off this weekend, though you would have been forgiven for not noticing. Probably something to do with a World Cup taking place on the other side of the world. Nevertheless, over a … END_OF_DOCUMENT_TOKEN_TO_BE_REPLACED
>> Read more

Premiership Rugby Cup (Tue, 24 Sep 2019)
There is a small matter of a World Cup taking place at the moment. It kicked off last Friday (September 20) and will dominate coverage of the sport for the next six weeks. As a consequence, the English domestic season, which normally starts at the beginning of September, was put back. The Gallagher Premiership has … END_OF_DOCUMENT_TOKEN_TO_BE_REPLACED
>> Read more

Rugby’s heavyweights ensure World Cup will garner Japan only fleeting prestige (Tue, 03 Sep 2019)
Rugby union is turning Japanese, but not for long. Once the World Cup is presented in Yokohama on 2 November and the bunting is swept up the hosts, like the other tier-two and -three nations making up the numbers, will slip back into relative obscurity for the next four years. Some will emerge briefly for … END_OF_DOCUMENT_TOKEN_TO_BE_REPLACED
>> Read more