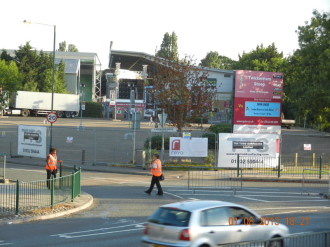 A Harlequin, to give the dictionary definition, is “a stock comic character; a clown or buffoon”. It’s an unusual choice for the name of a rugby club, but there is an interesting tale behind the decision.

Legend has it that when the rugby players at Hampstead F.C. were no longer all from the local area, a meeting was called in 1870 to determine a new name-but one that kept the HFC monogram. Out came a dictionary, the H section was pored over and the word harlequin struck a cord. The rest, as they say, is history, although it’s also worth noting that some members broke away from the club to form Wasps.

While its hard to believe those behind the new name picked it because they wanted the team to become a laughing stock, it is perhaps fitting that Harlequins have been teased over the years for being “Champagne Charlies”;City boys who are all style and little substance. Then there were the red faces (not faked) after the “Bloodgate” scandal of 2009/10. Still, the club-if not always the team-is on the up.

Former chief executive Mark Evans argued that the rich City set from the commuter belt no longer dominate Quins’ fan base. In fact, the majority of supporters come from the club’s four local boroughs-Richmond,Kingston-Upon-Thames, Wandsworth and Merton. He says “The fan base is now much bigger, much more local and much more socially diverse. Season tickets are now very close to 7,000, which is a big number for the South-east and significantly higher than other clubs in the area. Traditionally there aren’t a large number of people who come to watch regularly in the South-East; it’s more of a participation sport. That perception of City links will always be part of the club, its part of our history, but it’s not a reflection of the fan and playing base of the club now. However, I do think it has an influence in terms of the fact that the crowd here expect the team to play with a level of openness, to give it a real go and throw it about a bit.”

To accommodate the expanding fan base, the Twickenham Stoop has undergone a huge development in the past ten years, doubling its capacity to 14,816. Then there was one new stand but little temporary stands at either end, and there were the changing rooms with just a balcony on top. Teams even had to share toilets. It is said that a decade ago, if you were making any noise people would tell you to shut up. Now, thankfully, the atmosphere is much more vocal.

From: Brian Moore’s “Beware of the Dog”

“Harlequin Football Club is the correct name for the rugby club everybody knows as Quins…..On the wall of the old Committee bar they used to have an old photograph of the five former Quins who were internationals and Members of Parliament.

“Quins never emulated the fraternity of a provincial rugby club. Wasps and Saracens managed this by manufacturing a grudge against “fashionable” Quins, the lah-di-dahs. The geographical spread from whence came the Quins players meant that few socialised with each other away from the club.

When it came to the public support for the club, this too was difficult; in contrast with Bath for example. There, in sporting terms, the club is the centre of the town……It is not difficult to establish an identity and a sense of purpose when this geographical proximity exists.” ( p. 168)

The Harlequin Football Club was founded in 1866 (although the first recorded game was not until 1867) as Hampstead Football Club. It was renamed in 1870. The first account of this is that there was a meeting under a street lamp at two o’clock in the morning in Hampstead. The second, and probably more believable one, is that the name was changed when the membership was no longer purely a local one. This version has it that a meeting was called, and because the HFC monogram had to be retained, a dictionary was produced, and, when the reader reached Harlequin, he was stopped and all present agreed, and so the new name was born.

An offshoot of this was that there was a split in the membership of the Hampstead Football Club and the half that did not form the Harlequins went off and formed a club known as the Wasps.

For their first forty years Harlequins were very nomadic in their existence, and played at a total of 15 venues. However, since 1909 they have played at only three. In 1906, Quins were invited by the Rugby Football Union to use the new national stadium in Twickenham. In those days only one or two internationals were played there during the season, and it wasn’t long before the RFU ground became the headquarters of the Harlequin Football Club.

In 1963, Quins acquired an athletics ground with 14 acres just over the road from the RFU ground, which became the Harlequin training pitch. This subsequently became Harlequin’s permanent home, known for many years as the Stoop Memorial Ground, before being renamed the Twickenham Stoop in 2005. The stadium is named after Adrian Dura Stoop who played 182 times for Quins between 1901 and 1939, captained the side for eight years, was honorary secretary for 28 years and finally became President between 1920 and 1949.

Too much of a Good Thing? (Tue, 26 Nov 2019)
Is it just us, or is there just a little too much rugby at the moment? You couldn’t fault the World Cup or the action, but to get into the European Cup two weeks later feels just a little bit more of a burden than it should do. And then, having forgotten about it because … END_OF_DOCUMENT_TOKEN_TO_BE_REPLACED
>> Read more

Saracens in the Dock (Tue, 12 Nov 2019)
Just imagine for a moment what the last 10 days have been like if you are one of Saracen’s England players…You lose a World Cup Final, have to endure a long, tedious flight back to England, where, instead of an open-topped bus parade through London, you are met with the news that your club has … END_OF_DOCUMENT_TOKEN_TO_BE_REPLACED
>> Read more

The Championship Starts (Tue, 15 Oct 2019)
Greene King Championship London Scottish (13) v Newcastle Falcons (17) The Athletic Ground Saturday October 12,2019 The 2019/20 Greene King Championship season kicked off this weekend, though you would have been forgiven for not noticing. Probably something to do with a World Cup taking place on the other side of the world. Nevertheless, over a … END_OF_DOCUMENT_TOKEN_TO_BE_REPLACED
>> Read more

Premiership Rugby Cup (Tue, 24 Sep 2019)
There is a small matter of a World Cup taking place at the moment. It kicked off last Friday (September 20) and will dominate coverage of the sport for the next six weeks. As a consequence, the English domestic season, which normally starts at the beginning of September, was put back. The Gallagher Premiership has … END_OF_DOCUMENT_TOKEN_TO_BE_REPLACED
>> Read more

Rugby’s heavyweights ensure World Cup will garner Japan only fleeting prestige (Tue, 03 Sep 2019)
Rugby union is turning Japanese, but not for long. Once the World Cup is presented in Yokohama on 2 November and the bunting is swept up the hosts, like the other tier-two and -three nations making up the numbers, will slip back into relative obscurity for the next four years. Some will emerge briefly for … END_OF_DOCUMENT_TOKEN_TO_BE_REPLACED
>> Read more