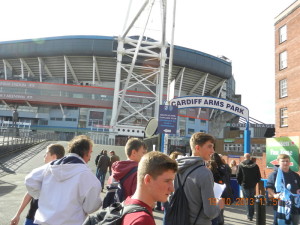 Until the beginning of the 2003/04 season Welsh rugby was organised in a typical league pyramid, similar to the English Premiership, at the top of which were 9 professional clubs. However, it had become clear that for financial reasons, Wales could not support nine professional teams.

In a process instigated by the then CEO of the Welsh Rugby Union, David Moffett, the nine clubs began the process of organising themselves into “Regional” teams.

An agreement was reached whereby Cardiff RFC would be allowed to form a standalone club, so that they would not have to amalgamate with any of the other 8 professional clubs. Consequently, Cardiff RFC created the Cardiff Blues, and the new club was launched in June 2003.

From the beginning of the 2009-10 season Cardiff Blues moved to the new Cardiff City Stadium at Leckwith, and so shared tenancy with Cardiff City F.C.

However on May 8 2012 it was announced that the 20-year lease between the two clubs had been broken “by mutual consent”, and that Cardiff Blues would return to the Arms Park from the start of the 2012/13 season. Declining demand and supporter dissatisfaction had already led them to playing a couple of games at the Arms Park in February, 2012. A maximum capacity crowd of 8,000 saw them play Connacht despite short notice, and a week later they sold out again against Ulster.

The Blues may still play some games at the Cardiff City Stadium if the demand is there.

Cardiff is an easy city to get to with more and more flights coming through Cardiff International Airport, which has direct links to Europe and Ireland as well as many British cities

The city is also well wired for rail and road links and once you are here, transport is mercifully easy. Compared to London and Paris, Cardiff is little more than a village (We are only talking size here!)

Too much of a Good Thing? (Tue, 26 Nov 2019)
Is it just us, or is there just a little too much rugby at the moment? You couldn’t fault the World Cup or the action, but to get into the European Cup two weeks later feels just a little bit more of a burden than it should do. And then, having forgotten about it because … END_OF_DOCUMENT_TOKEN_TO_BE_REPLACED
>> Read more

Saracens in the Dock (Tue, 12 Nov 2019)
Just imagine for a moment what the last 10 days have been like if you are one of Saracen’s England players…You lose a World Cup Final, have to endure a long, tedious flight back to England, where, instead of an open-topped bus parade through London, you are met with the news that your club has … END_OF_DOCUMENT_TOKEN_TO_BE_REPLACED
>> Read more

The Championship Starts (Tue, 15 Oct 2019)
Greene King Championship London Scottish (13) v Newcastle Falcons (17) The Athletic Ground Saturday October 12,2019 The 2019/20 Greene King Championship season kicked off this weekend, though you would have been forgiven for not noticing. Probably something to do with a World Cup taking place on the other side of the world. Nevertheless, over a … END_OF_DOCUMENT_TOKEN_TO_BE_REPLACED
>> Read more

Premiership Rugby Cup (Tue, 24 Sep 2019)
There is a small matter of a World Cup taking place at the moment. It kicked off last Friday (September 20) and will dominate coverage of the sport for the next six weeks. As a consequence, the English domestic season, which normally starts at the beginning of September, was put back. The Gallagher Premiership has … END_OF_DOCUMENT_TOKEN_TO_BE_REPLACED
>> Read more

Rugby’s heavyweights ensure World Cup will garner Japan only fleeting prestige (Tue, 03 Sep 2019)
Rugby union is turning Japanese, but not for long. Once the World Cup is presented in Yokohama on 2 November and the bunting is swept up the hosts, like the other tier-two and -three nations making up the numbers, will slip back into relative obscurity for the next four years. Some will emerge briefly for … END_OF_DOCUMENT_TOKEN_TO_BE_REPLACED
>> Read more