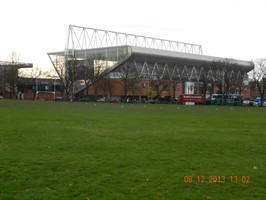 Leicester Football Club was formed at a meeting held in the city’s George
Hotel in August 1880 with the merger of three smaller teams. That October, the new club wore black for their first game against Moseley at the Belgrave Cricket and Cycle Ground.

It was not until five years or so later that the nickname “Tigers” was first used the Leicester Daily Post reporting that “The Tiger stripes were keeping well together”. The origin of the nickname is uncertain, but it may have come from the Leicestershire Regiment which had received the nickname “Tigers” after serving in India, and from 1825 had worn a cap badge with a “royal” tiger to mark the connection.
An alternative theory is that the team wore a brown and yellow striped shirt.

The now-famous scarlet, green and white jerseys were not introduced until 1891, although these were in a vertical stripe formation until the distinctive hoops were first worn in September 1895. In the 1926/27 season Leicester started using letters to identify their forwards, expanding the practice by 1931/32 to the whole team.

Leicester had moved to their present ground at Welford Road (which is actually in Aylestone Road) in 1892. The first stands accommodated 1100 spectators. In 1920, the Crumbie Stand was built and a terrace added just a year later along with an extension to the members’ stand, taking the ground capacity up to 10,250. It would be another 75 years until further extensions were made to Welford Road with the Alliance & Leicester stand being built in 1995.

On November 23 2004, the club announced that it had entered into a 50-50 joint venture with the city’s main football club, Leicester  City, to purchase City’s current ground, the Walkers Stadium. If the purchase had gone through the Tigers would have surrendered their lease on Welford Road and moved into Walkers Stadium. However, after several months of talks, the two clubs could not agree as to which side would have priority at Walkers Stadium, and they ended any ground-share plans in July 2005. However, this did not stop the Tigers playing three games at the Walkers Stadium at the end of the 2008/09 season due to the demolition of the old North Stand at Welford  Road.

On June 11 2007 the club announced plans that it was working with AFL (who were involved in re-developing Manchester United’s Old Trafford Stadium) for a redevelopment plan which would raise the capacity of their Welford Road stadium from 17,498 to 24,000 by 2011. On February 20 2008 Leicester Tigers received planning consent for the £60million re-development of their ground. The first phase of the redevelopment would include space for 10,000 supporters in a new North stand (Granby Halls side), taking capacity to 24,000.
After full renovation it will have a capacity of above 30,000. In the summer of  2008 work began on the construction of the new North stand-called the “Caterpillar Stand” after the club’s main sponsor. The work was completed in time for the first home game of the 2009/10 season against Newcastle Falcons.

﻿What springs to mind when you think of Leicester Tigers? They win a
lot, with monotonous regularity, many would say. In the 15 years of
professional rugby, they’ve won 11 major trophies- that’s a lot of silver
polish.

They have the biggest club rugby ground in England, with the biggest single-tier stand in the UK apart from Liverpool’s famous Kop ( which is just one row of seats bigger), and thousands of fans ready to fill it. In short, Leicester are the Man Utd of English rugby-except without the £700m debt.

Maybe it can all be traced to a fixture over a century ago. When Leicester’s game with Fettes-Lorettonians fell through in 2008, the club invited the Barbarians to fill the gap in Leicester’s Christmas rugby festival. So began a hugely popular annual meeting that survived right up to 1998, even being played during the war years. Under legendary club secretary Tom Crumbie, Leicester built stands big enough to accommodate the hordes who wanted to watch them in the 1920’s.And that meant that when Chalkie White arrived to revive the club’s dwindling post-war fortunes, resulting in a hat-trick of John Player Cup wins (1979-81), there was space at Welford Road for the new masses.

Gates for friendlies in the early 1970’s were small-just 1-2000, but the Leicester-Barbarians Christmas cracker always sold out, so the club decided you had to be a season ticket-toting member to be able to see the Baa-Baas. Thus when the game eventually went professional, Leicester had 14,000 members and money in the bank. It turned out to be inspired management. While other clubs scrabbled around for cash by courting benefactors or borrowing from the banks, Leicester signed up a mighty squad, tripled the £47 season-ticket price to cover wages, and converted to a PLC-the first club to do so. The Leicester model is one of shared ownership: they have more than 11,000 shareholders but no individual can own more than 10%

The fans of course are a huge part of the success story, a look at Twitter revealing that they’ve come from as far as Jersey (where the Tigers
run coaching courses) and Denmark.
They say that if you hang a Tigers shirt out at Welford Road, 4,000 will come to watch.

Too much of a Good Thing? (Tue, 26 Nov 2019)
Is it just us, or is there just a little too much rugby at the moment? You couldn’t fault the World Cup or the action, but to get into the European Cup two weeks later feels just a little bit more of a burden than it should do. And then, having forgotten about it because … END_OF_DOCUMENT_TOKEN_TO_BE_REPLACED
>> Read more

Saracens in the Dock (Tue, 12 Nov 2019)
Just imagine for a moment what the last 10 days have been like if you are one of Saracen’s England players…You lose a World Cup Final, have to endure a long, tedious flight back to England, where, instead of an open-topped bus parade through London, you are met with the news that your club has … END_OF_DOCUMENT_TOKEN_TO_BE_REPLACED
>> Read more

The Championship Starts (Tue, 15 Oct 2019)
Greene King Championship London Scottish (13) v Newcastle Falcons (17) The Athletic Ground Saturday October 12,2019 The 2019/20 Greene King Championship season kicked off this weekend, though you would have been forgiven for not noticing. Probably something to do with a World Cup taking place on the other side of the world. Nevertheless, over a … END_OF_DOCUMENT_TOKEN_TO_BE_REPLACED
>> Read more

Premiership Rugby Cup (Tue, 24 Sep 2019)
There is a small matter of a World Cup taking place at the moment. It kicked off last Friday (September 20) and will dominate coverage of the sport for the next six weeks. As a consequence, the English domestic season, which normally starts at the beginning of September, was put back. The Gallagher Premiership has … END_OF_DOCUMENT_TOKEN_TO_BE_REPLACED
>> Read more

Rugby’s heavyweights ensure World Cup will garner Japan only fleeting prestige (Tue, 03 Sep 2019)
Rugby union is turning Japanese, but not for long. Once the World Cup is presented in Yokohama on 2 November and the bunting is swept up the hosts, like the other tier-two and -three nations making up the numbers, will slip back into relative obscurity for the next four years. Some will emerge briefly for … END_OF_DOCUMENT_TOKEN_TO_BE_REPLACED
>> Read more