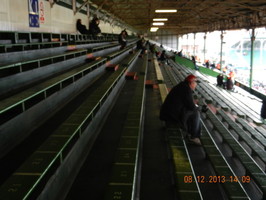 The Benches in the Holland and Barrett stand

Welford Road has hosted rugby matches since 1892, and even saw an international match as early as 1902 when England beat Ireland 6-3. The first game under lights was played in 1964, and the stadium has been continually developed and expanded until it is now the largest dedicated rugby club ground in the U.K. And there are plans to increase the current 24,000 capacity to 30,000.

As part of Phase 1 of the Tigers Redevelopment Plan, the 90-year old Members Stand, which was re-named the Next Stand in its latter years, was demolished before the end of the 2008/09 season. With a total capacity of 10,000 it was originally called the Caterpillar Stand, but was re-named the MET-Rx stand in 2014

First built in 1918, the stand was named the Crumbie Stand after the club’s secretary Thomas Crumbie. The terraces were erected later; taking the capacity to about 7,000.In 2010 it was re-named the Holland & Barrett Stand. Stage 3 of the Tigers Redevelopment Plan would likely involve the demolition of this stand

Originally the Alliance and Leicester Stand, the Goldsmiths Stand is an all-seater with a capacity of 6,000, and 16 executive suites

The original 100-year old clubhouse and temporary stand have been demolished and replaced by a new stand hold 3,100 fans, 62 disabled fans and increase the stadium’s capacity to 26,000.

There is a saving (about £2/3 a ticket) in buying tickets in advance.

-100 wheelchair bays, managed by match-day stewards, located in the GNC and, Goldsmiths Stands. Tickets purchased in these designated disabled areas will be provided with a complimentary carer’s ticket.

-Admittance for guide dogs on request

-Disabled toilet facilities throughout the stadium

-Catering facilities available throughout the stadium 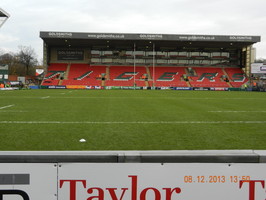 The Goldsmiths Stand
Too much of a Good Thing? (Tue, 26 Nov 2019)
Is it just us, or is there just a little too much rugby at the moment? You couldn’t fault the World Cup or the action, but to get into the European Cup two weeks later feels just a little bit more of a burden than it should do. And then, having forgotten about it because … END_OF_DOCUMENT_TOKEN_TO_BE_REPLACED
>> Read more

Saracens in the Dock (Tue, 12 Nov 2019)
Just imagine for a moment what the last 10 days have been like if you are one of Saracen’s England players…You lose a World Cup Final, have to endure a long, tedious flight back to England, where, instead of an open-topped bus parade through London, you are met with the news that your club has … END_OF_DOCUMENT_TOKEN_TO_BE_REPLACED
>> Read more

The Championship Starts (Tue, 15 Oct 2019)
Greene King Championship London Scottish (13) v Newcastle Falcons (17) The Athletic Ground Saturday October 12,2019 The 2019/20 Greene King Championship season kicked off this weekend, though you would have been forgiven for not noticing. Probably something to do with a World Cup taking place on the other side of the world. Nevertheless, over a … END_OF_DOCUMENT_TOKEN_TO_BE_REPLACED
>> Read more

Premiership Rugby Cup (Tue, 24 Sep 2019)
There is a small matter of a World Cup taking place at the moment. It kicked off last Friday (September 20) and will dominate coverage of the sport for the next six weeks. As a consequence, the English domestic season, which normally starts at the beginning of September, was put back. The Gallagher Premiership has … END_OF_DOCUMENT_TOKEN_TO_BE_REPLACED
>> Read more

Rugby’s heavyweights ensure World Cup will garner Japan only fleeting prestige (Tue, 03 Sep 2019)
Rugby union is turning Japanese, but not for long. Once the World Cup is presented in Yokohama on 2 November and the bunting is swept up the hosts, like the other tier-two and -three nations making up the numbers, will slip back into relative obscurity for the next four years. Some will emerge briefly for … END_OF_DOCUMENT_TOKEN_TO_BE_REPLACED
>> Read more