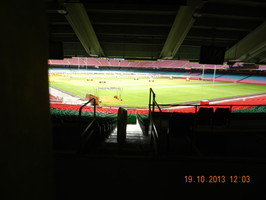 So near yet so far..The pitch at the Millennium Stadium from the South Stand of Cardiff Arms Park

The Cardiff Arms Park site was originally called the Great Park, a swampy meadow behind the Cardiff Arms Hotel, which dated from the reign of Charles 1.

Cardiff Arms Park was named after this hotel.

The story of the ground begins with the first stands appearing in 1881. Originally the Arms Park had a cricket ground to the north and a rugby union stadium to the south.

The Cardiff rugby ground has remained the home of the semi-professional Cardiff RFC, and the site is owned by Cardiff Athletic Club.

On May 8 2012 it was announced that Cardiff Blues would be returning to the Arms Park on a permanent basis.

The Stadium: The Arms Park has two main stands, the North Stand, which was renamed the Bmibaby Stand in August 2002, and the South Stand. Both of these have terracing below seating.

The other ends of the ground are the Westgate Street end (east) , which has rows of seating below executive boxes, plus the club shop, and the River Taff end (west) which has 26 executive boxes.

There are two main entrances, the south entrance, and the Gwyn Nicholls Memorial Gates (north entrance), named after   a former Welsh international.

Cardiff Arms Park is literally in the shadow of the Millennium Stadium, and finding the right entrance can be tricky for a novice as sign-posting is poor, and ,from personal experience, stewards less than helpful

In the 2013 of-season the pitch at  the Arms Park was replaced with an artificial FieldTurf surface.

Stadium Tours:  A popular destination is the Millennium Stadium. It offers regular tours on most days throughout the year, and is only a couple of minutes walk from Cardiff Central Station.

Cardiff Blues match day prices are dependent on the category of the game: A, B or C. 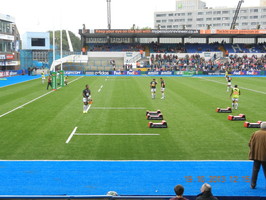 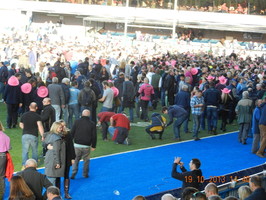 And this is what the crowd thought of it
Too much of a Good Thing? (Tue, 26 Nov 2019)
Is it just us, or is there just a little too much rugby at the moment? You couldn’t fault the World Cup or the action, but to get into the European Cup two weeks later feels just a little bit more of a burden than it should do. And then, having forgotten about it because … END_OF_DOCUMENT_TOKEN_TO_BE_REPLACED
>> Read more

Saracens in the Dock (Tue, 12 Nov 2019)
Just imagine for a moment what the last 10 days have been like if you are one of Saracen’s England players…You lose a World Cup Final, have to endure a long, tedious flight back to England, where, instead of an open-topped bus parade through London, you are met with the news that your club has … END_OF_DOCUMENT_TOKEN_TO_BE_REPLACED
>> Read more

The Championship Starts (Tue, 15 Oct 2019)
Greene King Championship London Scottish (13) v Newcastle Falcons (17) The Athletic Ground Saturday October 12,2019 The 2019/20 Greene King Championship season kicked off this weekend, though you would have been forgiven for not noticing. Probably something to do with a World Cup taking place on the other side of the world. Nevertheless, over a … END_OF_DOCUMENT_TOKEN_TO_BE_REPLACED
>> Read more

Premiership Rugby Cup (Tue, 24 Sep 2019)
There is a small matter of a World Cup taking place at the moment. It kicked off last Friday (September 20) and will dominate coverage of the sport for the next six weeks. As a consequence, the English domestic season, which normally starts at the beginning of September, was put back. The Gallagher Premiership has … END_OF_DOCUMENT_TOKEN_TO_BE_REPLACED
>> Read more

Rugby’s heavyweights ensure World Cup will garner Japan only fleeting prestige (Tue, 03 Sep 2019)
Rugby union is turning Japanese, but not for long. Once the World Cup is presented in Yokohama on 2 November and the bunting is swept up the hosts, like the other tier-two and -three nations making up the numbers, will slip back into relative obscurity for the next four years. Some will emerge briefly for … END_OF_DOCUMENT_TOKEN_TO_BE_REPLACED
>> Read more