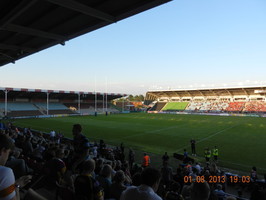 The "crowd" at a London Broncos game

In 1906 Harlequins were invited by the Rugby Football Union to use the new national stadium in Twickenham as only a handful of internationals were being played there each season. In 1963 Quins acquired an athletics ground just across the road from Twickenham, which became the Harlequin training pitch. The ground was named Stoop Memorial Ground after Adrian Stoop, a longtime Harlequins player and president, and was changed to Twickenham Stoop Stadium in 2005.

The main stand is the IG (West) Stand. This holds the changing rooms and club offices. It was built for the start of the 2005/06 season and has a capacity of about 4,000.

The DHL  (East) Stand, built in 1997, has a capacity of about 4,000, and houses the Mighty Quins Village, a children’s area This stand runs beyond the length of the pitch, so if you are seated in one of the end blocks you may be beyond the try line.

This is intended as a temporary structure, with about 2,000 seats, and is the only stand with supporting pillars. If further expansion is going to happen then this is the area most likely to be redeveloped.

This is the most recent stand to be re-developed, opening in the 2010/11 season. It holds about 4,000, and is the tallest stand in the stadium

Quins have announced plans to increase capacity at the Stoop to 20,000 over the next decade, with capacity initially rising from 14,800 to 16,800, with a new North Stand.

In Person: Visit the Harlequins Office at the Stoop.

It is recommended that blue badge holders arrive early in order to guarantee a place.

A total of 70 disabled seats are located in the East and West Stands, which include provision for associated carers.

There are 10 disabled toilets available for match day supporters, and an additional 4 for hospitality guests.

Too much of a Good Thing? (Tue, 26 Nov 2019)
Is it just us, or is there just a little too much rugby at the moment? You couldn’t fault the World Cup or the action, but to get into the European Cup two weeks later feels just a little bit more of a burden than it should do. And then, having forgotten about it because … END_OF_DOCUMENT_TOKEN_TO_BE_REPLACED
>> Read more

Saracens in the Dock (Tue, 12 Nov 2019)
Just imagine for a moment what the last 10 days have been like if you are one of Saracen’s England players…You lose a World Cup Final, have to endure a long, tedious flight back to England, where, instead of an open-topped bus parade through London, you are met with the news that your club has … END_OF_DOCUMENT_TOKEN_TO_BE_REPLACED
>> Read more

The Championship Starts (Tue, 15 Oct 2019)
Greene King Championship London Scottish (13) v Newcastle Falcons (17) The Athletic Ground Saturday October 12,2019 The 2019/20 Greene King Championship season kicked off this weekend, though you would have been forgiven for not noticing. Probably something to do with a World Cup taking place on the other side of the world. Nevertheless, over a … END_OF_DOCUMENT_TOKEN_TO_BE_REPLACED
>> Read more

Premiership Rugby Cup (Tue, 24 Sep 2019)
There is a small matter of a World Cup taking place at the moment. It kicked off last Friday (September 20) and will dominate coverage of the sport for the next six weeks. As a consequence, the English domestic season, which normally starts at the beginning of September, was put back. The Gallagher Premiership has … END_OF_DOCUMENT_TOKEN_TO_BE_REPLACED
>> Read more

Rugby’s heavyweights ensure World Cup will garner Japan only fleeting prestige (Tue, 03 Sep 2019)
Rugby union is turning Japanese, but not for long. Once the World Cup is presented in Yokohama on 2 November and the bunting is swept up the hosts, like the other tier-two and -three nations making up the numbers, will slip back into relative obscurity for the next four years. Some will emerge briefly for … END_OF_DOCUMENT_TOKEN_TO_BE_REPLACED
>> Read more