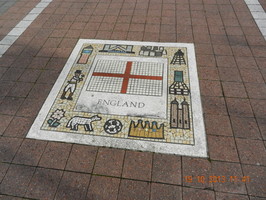 Yes,it is the Millennium Stadium.....

Travel and the Stadium

How to get to the city

There is a rail link with Cardiff Central Station, as well as regular bus services into the city.

Trains are the best option on match days, when traffic is heavy.

Rail        Getting to Cardiff by train is the most popular option for any major event so the trains are packed.  You should get a spot on a train if you book well ahead.

Both are only a five-minute walk from the Millennium Stadium.

Cardiff Central is the bigger and busier of the two stations. There are frequent links to London Paddington, West Wales and the North. Queen Street provides local and Valleys services.

On match days Cardiff Central station gets extremely busy, and crowd control measures are in place,

Both before and after the game, seat reservations for all trains leaving Cardiff Central are suspended  and seats are on a first come, first served basis.

Ensure a seat on a train by walking 20 minutes to Queens Street Station and get on a train to Cardiff Central. You are then already in the station while thousands wait outside.

Road      Directions are clearly given from the M4, with different access routes depending on your ticket. Be aware that the city centre will be restricted to traffic on match day, and the roads around the stadium are closed to vehicles at least two hours prior and after kick-off.

Usually. Westgate Street and St. Mary's Street are closed as well as the roads around the Civic Centre.

The M4 motorway skirts the city's northern suburbs and is less than an hour away from Bristol and Bath.

Cardiff runs an efficient park-and-ride scheme. Depending on whether you are seated in the north or south of the Millennium stadium, you are advised to get off at different junctions. Leave home early and you can avoid the worst of the congestion, but the return journey is a different matter. Allow five hours plus to get back to London after a big event.

From London and east: Get onto the M4 via J15 of the M25.Continue westbound through Swindon and Reading towards Bristol. Drive past Bristol and onto M48 for the Severn Road Bridge.(For alternative crossing, stay on M4) The M48 rejoins the M4 beyond Newport. Come off the motorway at J29 and join the A48 and follow signs for the city centre.

From north: Take either the M6 (east coast) or M1(west coast) southbound to Birmingham. At Birmingham take the M5 southbound until you reach the M4.Take the M4 westbound then follow directions over the Severn Road Bridge.

From south: Head for Bristol via the M5 to J15 to get onto the M4, then follow from London and east.

M4/Severn Bridge Tolls: Users only pay to get into Wales. Tollbooths (automatic and manned) are situated on the Wales side of the bridge.

Car Parking         The advice is not to enter Cardiff by car close to an event-instead make use of the excellent park and ride services. Signage for the scheme begins on the motorways approaching the city. Opposing fans are sent to different parks all over the city. The system has won praise from fans for its efficiency.

There are numerous large multi-storey and surface car-parks in the city. A voucher system operates in Cardiff's streets. As a rule , it will cost about £1 an hour for a maximum of two hours-you can buy the vouchers in most newsagents' shops around the city.

Remember that because the stadium is in the centre of the city, the streets immediately around it are closed to traffic for up to two hours before and after the game.

By Bus   Cardiff's Central Bus Station is a short walk from the ground.

There are direct coach links from major cities across the U.K.

How to reach the Stadium           Sitting bang in the middle of town, five minutes from the train station, and surrounded by the bars and restaurants of Cardiff, the Millennium Stadium is probably the most fan-friendly major stadium in                 the British Isles.

Directions from Station The Millennium Stadium is on the east bank of the river, which runs north to south of the city.

As soon as you come out of Cardiff Central Station you'll spot the structure of the impressive arena.

The Stadium: A Brief History

The Victorian engineer Isambard Kingdom Brunel diverted Cardiff's River Taff to enable him to bring the railway to the city. The drained area was used for sport, and was the location of the original Wales                 national rugby stadium. Named after a nearby hotel where players would change before matches, Cardiff Arms Park was the soul of Welsh rugby and plans to replace it horrified many fans.

The Millennium Stadium took three years to build, and cost £150million. When it opened for Rugby World  Cup 1999, it proved itself a worthy successor and is now the home of both the rugby and football national sides, with rock concerts staged out of season.

The stadium's soaring shiplike structure can be seen from all over the city, and on match days the atmosphere is unbeatable.

There are three tiers of seating on three sides, with a slightly unusual gap in the structure in the North Stand(which backs onto Cardiff Arms Park, home of the Cardiff Blues )where there was limited space and therefore only two tiers. The North and South Stands are behind the posts, with the East and West Stands running along the sidelines.

Despite the size of the ground, the proximity of the stands to the pitch means that even the cheaper seats in the top tier aren’t too far from the action, and the giant screens suspended from the roof at either end of the ground help fill in any gaps.

It is unlikely that you will have much say in where you sit but try to avoid the front three rows because your eyes will be level with the players' feet.

Also, if you are in the very back row take a scarf. There is often a draft that whistles through the gaps of the stand.

Stadium Tours   Sports fan or not, a tour behind the scenes at the Millennium Stadium is a must. Visit the dressing rooms and walk out onto the pitch, then see the royal box and take in the view from the top of the stands.

The Stadium has the biggest closing roof in the world, and a removable pitch to accommodate rock concerts and other large events.

No tours on event and match days

A number of Disabled Car Parking spaces are available and can be reserved by prior arrangement with the stadium. Allocation of these passes will be addressed on an event-by-event basis.

From the north along the Riverwalk to Gate 1.

From the east across Westgate Plazq to Gate 3.

From the south across Millennium Plaza to Gates 6 & 7.

Provision for wheelchair users is available throughout the ground at all levels:

Provision at Level 3 is flexible to allow various combinations of wheelchair users, friends and family subject to prior notification to stadium management.

Spaces on the upper levels are reached via lifts and level access.

Toilet facilities for disabled spectators are all easily accessible.

The schedule of toilet provision at each level is as follows:

Level 5 Hospitality: Private boxes at Level 5 are all wheelchair accessible and 4 disabled unisex WC’s are available at this level.

These are located close to the accessible viewing areas at all levels.

Counter and queuing areas are designed and positioned to enable independent access whilst not impeding circulation routes. It is recognized that disabled people may find it difficult to access facilities during the limited and congested periods at half-time and therefore operate a refreshment order service in conjunction with stewards

The Millennium Stadium operates a personal radio receiver system with either a head-set or mini-induction loop in order for commentary to be available for the visually impaired and hard of hearing.

Assistance dogs will be permitted in the stadium by prior arrangement. In order to provide sufficient room and comfort for the dogs they will be restricted to the accessible viewing area at the rear of the lower tier of seating on Level 3.

There are no specific areas of the ground that facilitate access for the ambulant disabled. However there are several seats which can be accessed easily by those using crutches, sticks or walking frames. Please call 0292 0822145 before you book your tickets.

Ten wheelchairs are available for use by spectators to provide easier access to their seats. These cannot be pre-booked, and cannot be used in the disabled viewing areas.

Too much of a Good Thing? (Tue, 26 Nov 2019)
Is it just us, or is there just a little too much rugby at the moment? You couldn’t fault the World Cup or the action, but to get into the European Cup two weeks later feels just a little bit more of a burden than it should do. And then, having forgotten about it because … END_OF_DOCUMENT_TOKEN_TO_BE_REPLACED
>> Read more

Saracens in the Dock (Tue, 12 Nov 2019)
Just imagine for a moment what the last 10 days have been like if you are one of Saracen’s England players…You lose a World Cup Final, have to endure a long, tedious flight back to England, where, instead of an open-topped bus parade through London, you are met with the news that your club has … END_OF_DOCUMENT_TOKEN_TO_BE_REPLACED
>> Read more

The Championship Starts (Tue, 15 Oct 2019)
Greene King Championship London Scottish (13) v Newcastle Falcons (17) The Athletic Ground Saturday October 12,2019 The 2019/20 Greene King Championship season kicked off this weekend, though you would have been forgiven for not noticing. Probably something to do with a World Cup taking place on the other side of the world. Nevertheless, over a … END_OF_DOCUMENT_TOKEN_TO_BE_REPLACED
>> Read more

Premiership Rugby Cup (Tue, 24 Sep 2019)
There is a small matter of a World Cup taking place at the moment. It kicked off last Friday (September 20) and will dominate coverage of the sport for the next six weeks. As a consequence, the English domestic season, which normally starts at the beginning of September, was put back. The Gallagher Premiership has … END_OF_DOCUMENT_TOKEN_TO_BE_REPLACED
>> Read more

Rugby’s heavyweights ensure World Cup will garner Japan only fleeting prestige (Tue, 03 Sep 2019)
Rugby union is turning Japanese, but not for long. Once the World Cup is presented in Yokohama on 2 November and the bunting is swept up the hosts, like the other tier-two and -three nations making up the numbers, will slip back into relative obscurity for the next four years. Some will emerge briefly for … END_OF_DOCUMENT_TOKEN_TO_BE_REPLACED
>> Read more