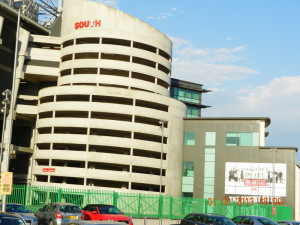 The Stadium from the south

Travel and the Stadium

The station is a short walk from the Stadium.

The London Underground runs to Richmond on the District Line, which is also served by Overground trains from Waterloo.

There is a regular event-day shuttle bus service between Richmond station and the Stadium.

After the match, a service also runs to Hounslow East station on the Piccadilly Line.

Road      Twickenham Stadium is on the northern side of the A316 into London.

From the M25 motorway, exit at Junction 12 on to the M3 London-bound. This becomes the A316,          and Twickenham Stadium is off the Whitton Road roundabout next to the Lexus/Toyota       car dealership.

From London, turn right off the A316 at the Whitton Road roundabout.

Car Parking: All the roads surrounding the stadium are for resident permit holders only and any unauthorised vehicles will be towed away. On-site car parking is extremely limited and is normally pre-allocated for international matches. Parking is generally available on site for non-international matches if booked in advance.

Twickenham's off-site car park is called Rosebine Avenue and is next to the Twickenham Stoop (home of Harlequins RFC) on the A316(Chertsey Road) this is about 10 minutes walk from the stadium.

Larger vehicles, such as transit vans, stretch limousines, minibuses and coaches can beaccommodated in some of the RFU car parks.

Free parking facilities for bikes and motorbikes are available in the Stadium's North and West car parks.

By Coach: Direct coach services depart for Twickenham Stadium from 22 major towns and cities across the U.K.

How to reach the stadium:

The stadium is a 10-minute walk from Twickenham overground station (just follow the crowd!),    or there is a free shuttle bus from the A316 near Richmond Station.

The Ground:      When RFU committee member Billy Williams was charged with finding a permanent home for English rugby he could not have forecast that 8.9 acres of market garden in southwest rugby bought for £5,572.12s and 6d would become one of the major venues in any sport.

The recently renovated ground features a hotel and health club in the new South Stand, plus 26 bars, The Council Room for RFU officials, the ERIC for former players, and the President's Suite are plush areas behind the scenes, permanently hidden from most of the Twickenham crowd.

In addition to rugby, Twickenham has also staged rock concerts and even hosts an annual Jehovah's Witnesses convention.

A century of players are commemorated by blue plaques. These include Martin Johnson, Cliff Morgan , Jonah Lomu, and Prince Alexander Obelensky, who scored two tries against the All Blacks in 1936.

Too much of a Good Thing? (Tue, 26 Nov 2019)
Is it just us, or is there just a little too much rugby at the moment? You couldn’t fault the World Cup or the action, but to get into the European Cup two weeks later feels just a little bit more of a burden than it should do. And then, having forgotten about it because … END_OF_DOCUMENT_TOKEN_TO_BE_REPLACED
>> Read more

Saracens in the Dock (Tue, 12 Nov 2019)
Just imagine for a moment what the last 10 days have been like if you are one of Saracen’s England players…You lose a World Cup Final, have to endure a long, tedious flight back to England, where, instead of an open-topped bus parade through London, you are met with the news that your club has … END_OF_DOCUMENT_TOKEN_TO_BE_REPLACED
>> Read more

The Championship Starts (Tue, 15 Oct 2019)
Greene King Championship London Scottish (13) v Newcastle Falcons (17) The Athletic Ground Saturday October 12,2019 The 2019/20 Greene King Championship season kicked off this weekend, though you would have been forgiven for not noticing. Probably something to do with a World Cup taking place on the other side of the world. Nevertheless, over a … END_OF_DOCUMENT_TOKEN_TO_BE_REPLACED
>> Read more

Premiership Rugby Cup (Tue, 24 Sep 2019)
There is a small matter of a World Cup taking place at the moment. It kicked off last Friday (September 20) and will dominate coverage of the sport for the next six weeks. As a consequence, the English domestic season, which normally starts at the beginning of September, was put back. The Gallagher Premiership has … END_OF_DOCUMENT_TOKEN_TO_BE_REPLACED
>> Read more

Rugby’s heavyweights ensure World Cup will garner Japan only fleeting prestige (Tue, 03 Sep 2019)
Rugby union is turning Japanese, but not for long. Once the World Cup is presented in Yokohama on 2 November and the bunting is swept up the hosts, like the other tier-two and -three nations making up the numbers, will slip back into relative obscurity for the next four years. Some will emerge briefly for … END_OF_DOCUMENT_TOKEN_TO_BE_REPLACED
>> Read more